A story about the 1918 Influenza in Newfoundland
​by Robert A. Cotton
​This story is inspired by actual events recorded in the 1918 -1919 diaries of my grandfather, Reverend Robert S. Smith.  These diaries cover his time stationed in Green’s Harbour, Newfoundland.

A lone man stepped off the porch and made his way across the snow to the small stable at the back of the house. It was cold, his breath clearly visible in the weak light of an early January morning in 1919. His task was as necessary as it was simple: tend to the animals and clean the stable. He usually enjoyed this quiet time with the animals but today all he could think about were the people in Whiteway.
Robert was a minister stationed at Green’s Harbour on the east shore of Trinity Bay, Newfoundland. Whiteway was one of several outports on his circuit and many of the one hundred or so people who lived there were infected with influenza. Today he had to attempt to quarantine the community.
​The influenza virus had arrived in Newfoundland in the spring of 1918. Many had died in that first wave but many more had recovered after several days of experiencing typical flu symptoms such as chills, fever and fatigue. 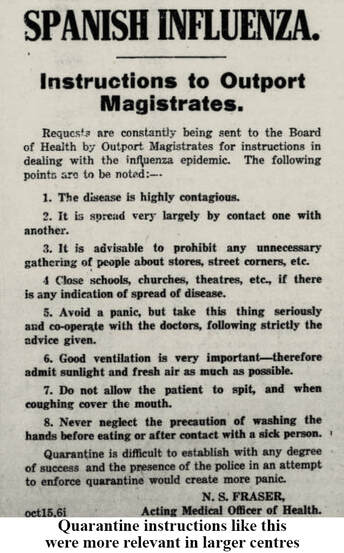 ​During his thirteen years in Newfoundland Robert had been helping people survive the many diseases that plagued the island’s outports. As an educated clergyman he felt it was his duty to help those who had no readily available physician. That meant his obligations extended to most of those living within his circuit which included the outports of Green’s Harbour, Cavendish, Whiteway and New Harbour.
When he had offered to help Dr. Chisholm, the regional doctor, all he had known about influenza was that there was no proven vaccine for it and no medicines to treat secondary infections such as pneumonia. With Dr. Chisholm’s help he had learned to prepare and dispense certain medicines. Salicin and aspirin when they could be found, helped with the pain, discomfort and fever. Cinnamon mixed in oil or in powder form with milk, helped reduce temperature. And, again with the help of Dr. Chisholm, Robert had learned how to prepare a saturated solution of quinine hydrochloride. It was thought this drug might work against the virus when administered intravenously. He wasn’t convinced of that when he looked to his own recent experiences.
The cases of influenza had dropped off in the middle of the summer of 1918 and everyone including Robert and Dr. Chisholm thought they had seen the worst of it. But they had been wrong, the influenza returned in the fall. This second wave, its character changed, brought on higher fevers and a rapid progression from uncomplicated influenza to fatal pneumonia, with many victims dying within hours or days. All of this frustrated the doctors and Robert because they could only treat the symptoms.
As he returned to the house to say goodbye to his wife Dora and pick up his medical kit, Robert thought of the deaths he had witnessed in the past year. It seemed to him that today, in January of 1919, he had been fighting this disease forever and making no progress. He feared today’s visit to Whiteway would be no different.
He had lost count of how often he had traipsed along this snow path to Whiteway in the past months. The three-mile hike from his home took him an hour or less depending on the weather and condition of the trail. Today it was in good shape, the icy crust had hardened up from yesterday’s rain making the snow firm beneath his boots. Still, Robert was glad he wasn’t walking on to Eastern Corner or Cavendish. It was a cold morning.
As always, he hated leaving Dora and their three young children. Robert was away from home often, preaching to and visiting with the people in his circuit. Dora supported his work in many important ways. She understood the demands upon his time and was accustomed to his absence, but she was now seven months pregnant. With this influenza epidemic, many Green’s Harbour folk and others would be visiting to pick up the medicines Robert had prepared for them the night before and of course this exposure made her, the baby, and the children vulnerable to infection. 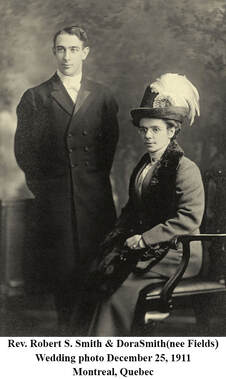 Having to leave his family worried Robert but tending to the needs of his Methodist brothers and sisters during this influenza epidemic was his duty as a missionary. That’s why he had come to Newfoundland.
Robert remembered the ocean voyage from his home in Lavenham, England to St. John’s in the summer of 1906. He remembered his eventual arrival, age twenty, in Cottrell’s Cove on Notre Dame Bay where he began his life’s work as a Methodist missionary. He remembered arriving with his new bride Dora at Heart’s Content on Trinity Bay as a fully ordained Methodist minister in 1912. That year their first child Dora was born. And he remembered moving a year later across the Heart's Content barrens to the village of Victoria where their first boy, William was stillborn. Their most recent move, in 1915, was to Green’s Harbour where their two boys, Herbert and Arthur were born. Robert was no stranger to the island’s harsh and hazardous ways but that didn’t make today’s task any easier. 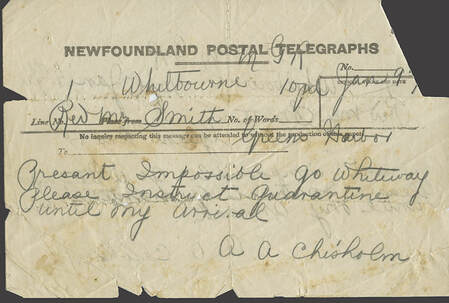 He had visited Whiteway two days ago and had found Miss Sarah Watt, barely twenty years old, to be extremely ill. She was on the daybed, warmed by the stove in the Watt’s kitchen. She had taken ill the day before with a high fever, sneezing, weakness and pain. Robert had given her medicine to alleviate the pain, discomfort and fever, and a quinine hydrochloride injection in the hope it might attack the virus itself.
He diagnosed several more cases of the influenza during that day’s visits and on his return to Green’s Harbour he had wired Dr. Chisholm in Whitbourne about the situation. The doctor had responded quickly.
“Present impossible go Whiteway. Please instruct quarantine until my arrival”
Robert had hoped to return and quarantine Whiteway the following day, but the weather had changed. It was the rainiest, dirtiest, windiest day he had encountered since coming to Green’s Harbour. The snow path had proved to be impassible because it had gone soft with rain.
So today he had to attempt to quarantine Whiteway. As he approached the outport he could see, as expected for this time of year, that there was no activity at the wharves, storage sheds and flakes along the shore. Out in the bay the Shag Rocks tried to escape the clutch of the ocean; and inland the buildings clung to the land in a haphazard manner. Robert knew that it was not haphazard at all but organized with great care to make full use of what little ground was suitable for gardens. He paused for a moment to get his watch, a wedding gift from Dora, out of his vest pocket. It was twenty after nine. Time to get on with it. January days were short. 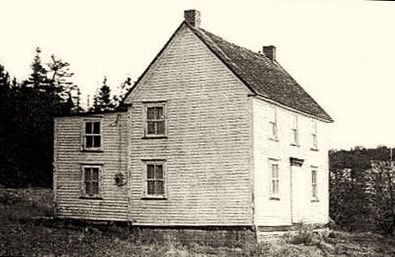 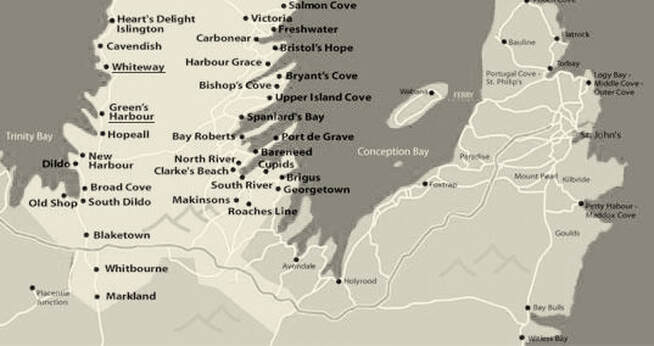 Robert Cotton is a photographer, writer and amateur historian. He is the curator of Grey Bruce Image Archives (GBIA), a collection historical photographs that represents life in Owen Sound and Grey/Bruce counties.
In 2018 he published a book Owen Sound Harbour – A Photographic History, using GBIA photographs to tell the story of the harbour. It is available at
​Foto Art Camera Shop in Owen Sound, a partner in Grey Bruce Image Archives.